“JOIN ME, AND TOGETHER, WE CAN RULE THE GALAXY AS FATHER AND SON!” “THE TRAGEDY OF DARTH VADER CONTINUES!”

“In the shattering climax of The Empire Strikes Back, Darth Vader infamously reveals his true relationship to Luke Skywalker and invites his son to rule the galaxy at his side. But Luke refuses — plunging into the abyss beneath Cloud City rather than turn to the Dark Side. We all remember Luke’s utter horror in this life-altering moment. But what about Vader? In this new epic chapter in the Darth Vader saga, the dark lord grapples with Luke’s unthinkable refusal and embarks on a bloody mission of rage-filled revenge against everything and everyone who had a hand in hiding and corrupting his only son. But even as he uncovers the secrets of Luke’s origins, Vader must face shocking new challenges from his own dark past.”

“Writer Greg Pak and artist Raffaele Ienco unleash Darth Vader on his dark quest of vengeance and discovery this February! With covers by InHyuk Lee”

“JOIN ME, AND TOGETHER, WE CAN RULE THE GALAXY AS FATHER AND SON!” “THE TRAGEDY OF DARTH VADER CONTINUES!” “In the shattering climax of The Empire Strikes Back, Darth Vader infamously reveals his true relationship…

THE FACE OF THE QUEEN! In the wake of the shocking revelations of The Empire Strikes Back, DARTH VADER continues his quest for revenge against everyone who hid his son Luke from him. But when…

GHOSTS OF VADER’S PAST! In his quest to destroy everyone who hid the existence of his son, Luke Skywalker, from him, Darth Vader has formed an unlikely partnership with an eerie shadow from his previous…

WHO HUNTS THE HUNTER? DARTH VADER continues his terrifying quest for vengeance against everyone who hid the existence of his son from him. But on NABOO, the DARK LORD OF THE SITH faces a deadly… 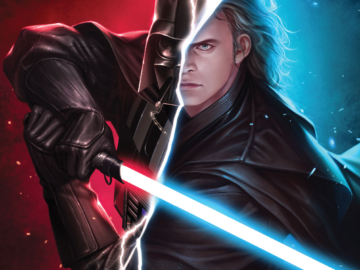 A QUEST FOR TRUTH…A JOURNEY OF DESTRUCTION! DARTH VADER’S search for revenge against those who hid his son Luke reaches a terrible climax – at the tomb of PADMÉ AMIDALA What secrets does he learn?…

THE PUNISHMENT! DARTH VADER failed to turn his son, Luke Skywalker, to the dark side of the Force. No…Luke was too weak to join his father in overthrowing EMPEROR PALPATINE. Vader sought revenge against those…

PAIN LEADS TO ANGER AND ANGER LEADS TO AN ELEMENT FROM EPISODE IV! As DARTH VADER battered and broken by the EMPEROR as punishment for his rebellion, drags himself across the blasted surface of MUSTAFAR…

INTO THE FIRE! Hungry for vengeance after his brutal punishment at the hands of THE EMPEROR, can DARTH VADER uncover his master’s secrets in the depths of MUSTAFAR? Stripped of his greatest weapons, can the…

THE ASSASSIN RETURNS! In his search for vengeance in the depths of MUSTAFAR, DARTH VADER has seized the mysterious key to the EMPEROR’S greatest secret. But the key itself needs a key — which only…

THE RED HORROR! After passing the test of THE EYE OF WEBBISH BOGG, DARTH VADER has learned the route to the hidden location of THE EMPEROR’S greatest secrets! But in THE RED NEBULA along the…

EXEGOL UNLEASHED! As punishment for his rebellion, DARTH VADER was broken by THE EMPEROR, his limbs shattered, forbidden to use THE FORCE. But after surviving OCHI OF BESTOON, THE EYE OF WEBBISH BOGG and the…

PRELUDE TO WAR OF THE BOUNTY HUNTERS: “RESTORATION” Returned to the fold after his rebellion against the EMPEROR, DARTH VADER faces the horrors of reconstruction in the secret laboratories of CORUSCANT. As he blacks out…